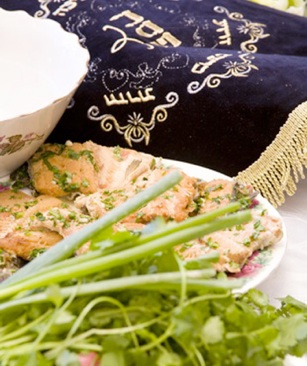 Rabbi Isaac Luria, the master kabbalist known as the Ari, teaches that at the original Pesach sedar, in Egypt, a conception occurred.  Conception is defined as the point when a soul makes contact with a body and they begin a life together, a story, and a journey.  So what was conceived on that first Pesach eve in Egypt?  The Ari teaches that it was the collective soul of Israel, a higher-order-unity that is greater than the sum of its parts.  Before, they were only individuals that shared a history, lineage, and belief.  It is known that there are certain levels of soul that cannot fit into individuals, because his/her vessel of body or personality are simply too small.  Only many individuals together, fused and coordinated, can hold these higher states of consciousness.  On Pesach eve, the soul of Israel made contact with its body, i. اسكريل e., the 600,000 families then under Moses’ charge.  And so, we say that a conception occurred.  The Mystical Body of Israel was conceived on seder night.  And then, according to the Ari, it was born seven days later on the last night of Pesach, with the parting of the sea which, on a cosmic scale, was the breaking of the birth waters. العاب 150   Israel as a collective entity was born on the other side.  Every Jew is a cell in this higher-order-unity called Israel that was conceived 3,500 years ago on seder night, and was born seven days later with the splitting of the sea.

Every Pesach this process repeats itself on a mini scale.  For again, teaches the Ari, we each come into this world with a soul that contains the lights of all that we will become, of all that we will realize in the course of our sojourn on this earth. Yet only part of that soul is actually integrated into our personality. اللاعب كريستيانو   The rest is makif (encircling).  It hovers above, attached but surrounding, and as our vessel grows, more and more of it fits inside.  Gradually, through the years, it moves from encircling to indwelling and becomes part of our conscious selves.  According to the Ari, each year, on Pesach we conceive and birth the next layer of soul that is going to come in, and that contains all the lights, insights and achievements that we will attain this coming year.

Now the Zohar teaches that the thoughts and intentions of the parents at the point of conception have profound impact on certain aspects of the child that is conceived from that union.  Though much is beyond the parent’s influence, there are definitely areas that are deeply and directly affected by them, and in particular, by this initiatory moment.

And so it follows that this same principle must apply to our Passover seder, since we are conceiving our new increment of consciousness, that will develop through our lives this coming year. The thoughts, intentions, and mindfulness that we bring to its practices will impact our quality of life similar to the affect that parents exert through the thoughts they bring to their children’s conception. [Specific suggestions regarding these intentions can be found in last years Pesach teaching that is included below for those who didn’t receive it].

I want to bless us that as individuals, as a nation, and as part of the larger world community, that we should birth a brood of radiant, healthy, soul-lights into the world this year though our Passover seders throughout the planet.  And in this “festival of freedom” we should discover what it really means to be free, which is to be free of all inappropriate and unproductive longing, fears and attachments, and instead, to be governed solely by the voice that speaks the deepest and most God-serving truth of our soul.